It might be the beginning of a brand new year and indeed of a new decade, but that doesn’t stop C64CD from putting another entry together for the 2019 iteration of the Intro Creation Competition over at the C64 Scene Database! This time we’ve got F15 D’Gamma Clone, a conversion of our own Apple II intro which was released back in 2016.

The code and graphics are based on what was created for that original, Apple-flavoured release but with some reworking for the extra resolution of the C64 and converted to characters at the same time. The music was originally composed by Ben Daglish for the Amiga and Atari ST game 3D Galax, with the slick C64 conversion being used here being handled by aNdy. 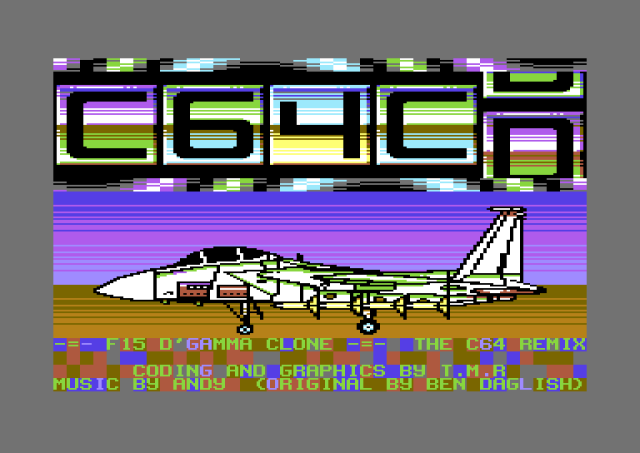 The extra colour data and soundtrack for this C64 version mean that, if it were handled in the same way as the Apple II code did things, the final intro would have exceeded the competition’s 16K memory limit, but it’s worth noting dear reader that both machines are running at around the same speed so the C64 could have handled a more direct port.

The “festive season” isn’t exactly your correspondent’s favourite time of the year and he tends to avoid it wherever possible or at least shout “bah, humbug” at people trying to be jolly towards him. With that said, one nice surprise this time around came from Commodore 264 series fan Gerliczer who, for reasons best known to himself, decided to convert the C64 version of Stercore over to his favourite Commodore 8-bit. Although the work was done on Stercore 264 in the summer of 2019, the final release had a ribbon wrapped around it for the 22nd of December.

Your correspondent is somewhat bemused by Gerliczer ‘s interest in converting Stercore 64 in the first place and the subsequent the positive reaction over at Plus/4 World considering the game’s origins, but now we have a Spectrum game which has been ported to the C64 and then onwards to the 264 series; that lays to rest a lot of the author’s false “arguments” about how difficult the C64 is to program in comparison to other platforms since the way this game works is pretty much identical on all three computers.

Goodness, it really has been busy here at C64CD Towers recently dear reader! Following on from his previous Intro Creation Competition entry, aNdy has written a second release called ICC Anon for the 16K category. This time there are some sprites in the lower border and two changing messages on screen, accompanied by a familiar-looking mask. 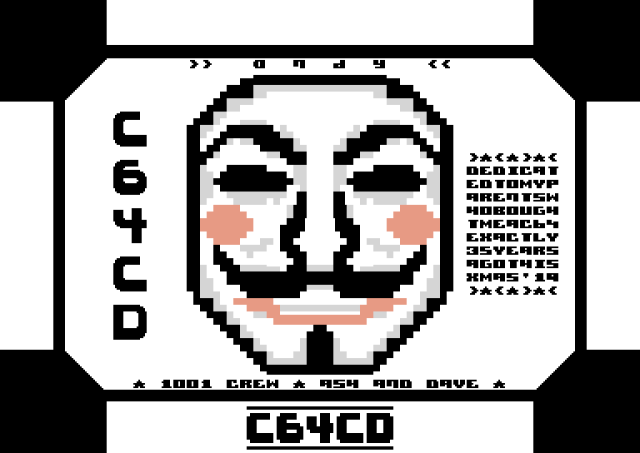 Using the upper and lower borders on the C64 is easy when you know how, but the best way to learn what can and indeed can’t be done is to experiment and this intro was aNdy doing just that, experimenting and finding out how sprites work in an area of the screen which was, technically, never meant to be visible.

As with aNdy’s previous releases, the source code for ICC Anon is included in the archive with the intro itself for those wanting to delve around.